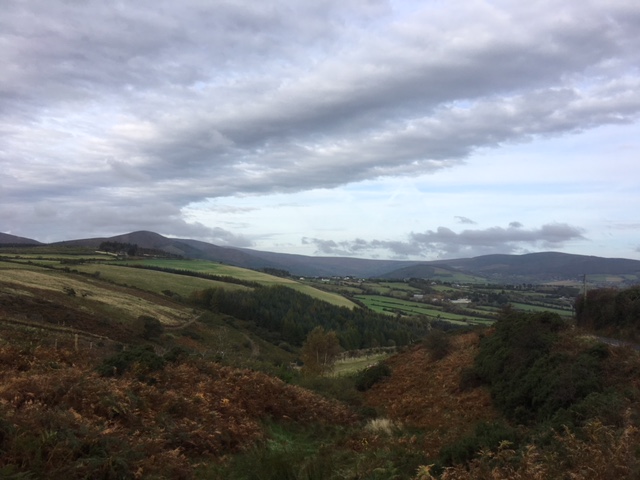 I was looking forward to my first morning in Ireland. I had a nice sleep, didn’t have too much trouble figuring out the shower or light switches, and had a yummy breakfast. Today, we were to board the bus and drive out to Glendalough Monastery. Anyone who knows me personally knows that I adore graveyards. Glendalough is an early medieval monastic settlement that dates from the 6th century and has an AMAZING graveyard. So much history!

Walking through the monastery gates, I was immediately excited and humbled. I can only imagine how many souls have walked through these gate over the past 1,500 years. Everyone from criminals and beggars, sick and infirm, souls seeking asylum have 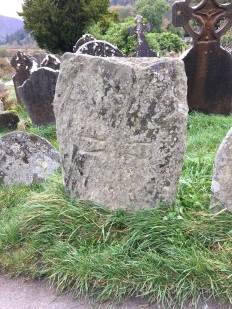 crossed into this sacred place. Some moved on, and some never left as evidenced by the thousands of headstones and markers that blanket the grounds. I came across what is believed to be the oldest headstone in the monastery. I was told by our guide that it dates back to possibly 600 AD. No one knows who is buried there as it only has an early Celtic cross carved into the stone. I was fascinated.

The monastery ruins still stand and are every bit as fascinating and beautiful as one could image. After our guided tour of the grounds, we were given time to explore on our own. I took this time to separate from my travel companions and spend some quite moments alone appreciating the souls that were buried there. Again, I was humbled.

Later that afternoon, we had a chance to spend the afternoon in downtown Dublin. Another gorgeous city, Dublin is teaming with history and architecture. Sue, Buttons, Lauren and I had lunch at the Mansion House. This eclectic pub is chock full of odd obscurities and memorabilia from decades past. It was a lot of fun to hang out. I enjoyed Hop House 13 Lager made by Guinness. Side note: I noticed that almost every “local” beer I had in Ireland was made by Guinness. I asked for the “local beer” everywhere I went. But, upon further inspection of the tap handles, the small print always read “Made by Guinness” or has Arthur Guinness’ signature. Don’t get me wrong, I enjoyed every beer I had. It was just surprising that many of the “local beer” is actually a big beer company. 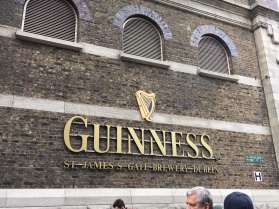 This is a perfect transition to our next stop on the tour: the Guinness Storehouse St. James Gate in Dublin. Yes, it’s “touristy.” Yes, Guinness is considered “big beer.” So what? Any beer lover SHOULD visit the Storehouse when in Dublin. I learned how to pour the “perfect pint” and learned a bit of history about this beer giant. It was a fun place to visit. And, of course, I spared no expense in the gift shop.

Later that night we were treated to a lovely Irish dinner show complete with step dancing and traditional Irish music. It was great fun. Then…the whiskey came out. Not being a hard alcohol girl, I smiled and choked down what I could. The saving grace was the delicious Irish coffee being served with dessert. Things had a chance to go sideways, but we all kept it together…except for Plee. He over indulged, just a bit. Ha!

We got back to the hotel and I thought I was done drinking for the night. But, the beer was calling so I stepped back into the hotel pub. I started with a McGargles Pale Ale and ended with Cute Hoor by Heineken. Both were pretty darn tasty but when it comes to names, the prize goes to Cute Hoor.

The next day we boarded our bus and headed to our next stop for the night. We passed 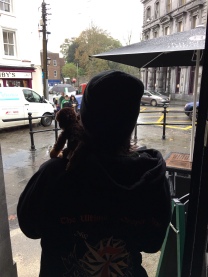 Me & Plee in Kilkenny.

through the pretty village of Kilkenny for lunch. Staying true to form, Lauren and I headed to the local pub. I can’t say enough good things about the pubs in the U.K. And Ireland. They are all exactly how I envision a pub should be. Warm and inviting, beautifully adorned in history, rustic food, and great beer. I enjoyed a Kilkenny Irish Draught. This creamy Irish Ale went well with my fish and chips. Very smooth and creamy. This is another beer brewed by Guinness. They’re EVERYWHERE.

Waterford is the Ireland’s oldest city having been founded by the Vikings around 914 AD. Some of the ancient Viking ruins dot the city. Before heading to our hotel, we stopped off at the Waterford Crystal factory and witnessed first hand how the famous crystal masterpieces are made. Quite fascinating.

Once we hit our hotel in Waterford , Lauren, another trip mate Chris, and I headed down to the hotel bar for a few drinks before walking the waterfront for dinner. I enjoyed a delicious ale brewed by Metalman Brewing. This was another of my favorites on the trip. Hoppier than most of the other beers I’ve tried while in the U.K. And Ireland, it was crisp and had a lovely finish. 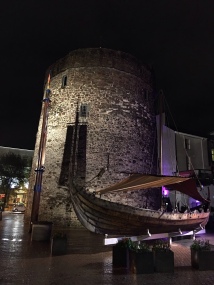 The three of us headed off along the waterfront to a local pub called The Reg. This darling pub is exactly how you would picture an Irish pub to be. Warm, inviting, and cozy. Live Irish bands play in the corner. The food is outstanding. The three of us enjoyed the food, beer and conversation. But, this night would end on a bit of a tragic note…

The next morning as I was packing my suitcase, I began looking for Pleepleus. I looked in my jacket, my purse, the suitcase, all over the room. He was no where to be found. Silly enough, I went into panic mode. I packed as quickly as I could and decided to retrace my steps from the night before. I walked the two blocks back to The Reg looking all along the sidewalks wondering if I had dropped him somewhere. Sadly, he was no where in sight.

I lost him. I was very sad. My numerous travel companions were also very sad. They grew to love the little guy and many volunteered to walk along the streets to look for him. But, time was of the essence so I had to accept that I lost him, and jump on the bus. After all, we had a ferry to catch to Wales. I tearfully hoped that someone would find Plee and take good care of him. Later in the day, a lady traveling with us brought me a new monkey she found in a local shop. He’s a darling little guy and wears a sweater with a large “L” on the front. I named him Larry. Thus, began the last leg of my trip with Larry, Pleeplues’ Irish cousin.

Wales is an absolutely breathtaking country! In fact, in my opinion, Wales rivals Ireland in beauty. Rolling green hills, tiny villages, breathtaking views. Today’s tour was a winery in the Welsh countryside. Glyndwr Vineyard is family owned and operated and is the oldest and largest vineyard in Wales. This gorgeous vineyard is surrounded by picturesque landscapes and dotted with tiny lakes and gardens. We took a tour of the vineyards, stopped off to feed the winery’s family of alpacas and sheep, and then dined on a beautiful lunch lovingly prepared on the grounds. Our lunch consisted of local cheeses, quiche, local sausages, and colorful veggies. It was delicious!

During lunch, I sat with the usual motley crew of Sue, Buttons and Lauren. Joining us at our table were some of our other travel mates also from Australia and New Zealand. I was the only non-Aussie/non-New Zealander at the table. During our lunch Sue took over the conversation, looked at me and stated “we have all decided to make you an honorary Kiwi Aussie.” I HAVE NEVER BEEN SO PROUD! I love my new friends! 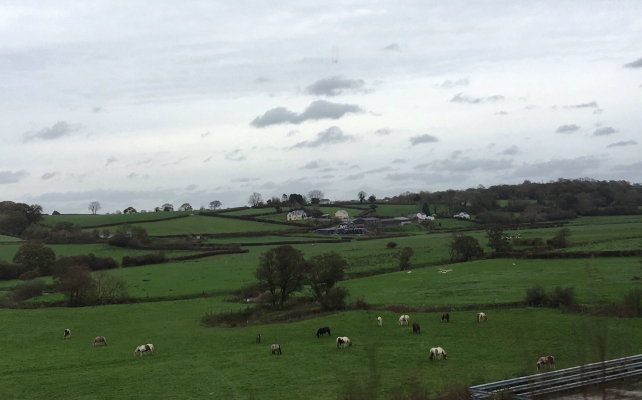 We boarded the bus for our next stop for the night in the capital city of Cardiff. Unfortunately, the weather was ghastly, so there was no sight seeing to be had in Cardiff so I have no comments about the sights and sounds of the city. We arrived after dark and the rain was coming down sideways. I elected to spend the evening in the hotel pub and unwind. I took Larry down with me. Again, with the great beer name, I ordered a pint (or a few) of Brains Smooth by Brains Brewery right there in Cardiff. This incredibly smooth, easy to drink, low ABV was perfect to end a long day.

While sitting in the pub, I observed what was a gaggle of young lads prepping for a bachelor party. They joked, bantered back and forth and laughed, a lot. They were pooling their money looking for “singles” for what I could only imagine was for some sort of scantly clad female that was to be their evening’s entertainment. Over all of the masculine voices I suddenly heard “well, it’s better than a fist up the arse!” I did my best to muzzle my chuckling. I looked at my bartender (also a female) and she looked back at me, shrugged, and said “welcome to Cardiff.” Yes, welcome indeed…