What can possibly be written about Great Britain and Ireland that hasn’t already been put to paper? The beauty, history, tragedy, and triumphs of these two islands have inspired artists, poets and writers for millennium. And after my recent trip, I can certainly see why.

Last month I took a 10 day tour of Great Britain and Ireland. It was the most amazing experience I’ve ever had and I would like to share it with you fine folks.

Now, my very dear friend Joy suggested that I take something with me to take photos with, like a doll. I thought about it and remembered that I had a Pleepleus doll that may be kind of fun to take with me on my travels. This proved to be true! So I packed Plee with me and took him everywhere. He was a great conversation starter, and it really was a lot of fun taking photos and creating a little story just for him. He will now be my permanent travel companion.

I signed up through Trafalgar Tours. The trip was to cover all five countries in eight days. And boy, did we ever!

After a 9 ½ hour, non-stop flight from Seattle, I landed in London on Friday the 13th. I had a private driver take me from the airport to the hotel. As we made our way through London, my driver was kind enough to point out various areas I may want to visit during my stay and gave me a bit of a history lesson along the way. We passed by so many amazing sights: centuries old buildings and homes mixed in with modern construction, gorgeous parks, and monuments a plenty. My head was swirling! I couldn’t believe I was actually in London!

My hotel was across the street from Hyde Park and the Marble Arch. I was traveling alone. Having never been to London before, I did not know my way around. My tour didn’t leave until the next day so I had the afternoon and evening to do with as I pleased. I asked my concierge to point me in the direction of Buckingham Palace. Yes, I’m fascinated by the romance of the British Monarchy. So sue me.

My concierge was concerned that I was going to walk there, by myself. He tried to talk me out of it by telling me it was a good 30 minute walk. In my best Maureen O’Hara I replied “that’s just a good stretch of the legs” and asked him to point me in the right direction. He pulled out a map and highlighted the best route. Off I went.

The walk along the busy city street of Park Ln was fascinating. I was surrounded by every ethnicity I could possibly imagine. Languages and attire from all over the world, just on this one street. It was fascinating and beautiful.

The sidewalks were a combination of old cobblestone and modern concrete. One really had to watch their step to keep from tripping and falling you’re your butt. As I crossed streets, I glanced down the alleyways and side streets. The beautifully aged buildings were covered in layers of black soot. History.

I crossed the main street called Piccadilly and made my way through Green Park. The park was full of tourists and locals. All enjoying the lush trees and green lawns of the park. Many were sitting or strolling in the sun. Others were taking a snooze in the shade. I wished that our parks back home saw such wonderful use.

I got to the edge of the park and looked up to the familiar building: Buckingham Palace. We’ve all seen the palace on TV or in magazines, but it’s not until you are standing in front of it that you really appreciate the majesty of the structure.

I crossed one final street and made my way to the front gates. Heavily armed guards stood watch at each entrance reminding me of the current times we’re living in. As I looked up I saw the grand balcony. For centuries that balcony has seen first wedding kisses, birthdays and coronations. It was exciting to be standing in front of such a great piece of British history and majesty. 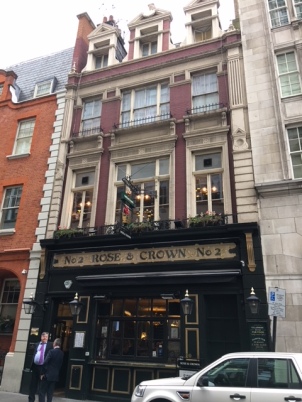 my hotel. I crossed back through Green Park and hoofed my way up Piccadilly. Down one of the aforementioned alleys was a darling pub straight out of a travel guide: Rose & Crown No. 2. I had forgotten I hadn’t eaten all day so I decided to stop in for a bit to eat and a pint. The pub was quaint and traditional. Old character and charm, wood panels, paintings and portraits of England’s heroes. There was even the expected fireplace in the corner! It was everything you would expect to see in an English Pub. I made my way past the glances of the locals and found a table all to myself next to the fireplace. I made my way through the crowd up to the bar and ordered my pint and a bag of “crisps” (potato chips to us Americans) and took my seat back at my table.

My first beer in the U.K. was GK IPA by Westgate Brewery. I love British IPA’s and this one was particularly nice. It was smooth, malty, and very easy to drink. Pair it up with some salt & vinegar chips…sorry, CRISPS, and it was a nice snack before dinner.

I settled in to my table and just observed the humanity around me. I listened to the wonderful accents and enjoyed the moment. I was really in England. I was really in the country I’ve dreamed about visiting since I was a child. It still didn’t seem real, but there I was.

As the sun lowered and the sky dimmed, I decided it was best to finish up and make my way back to my hotel. Buses and black cabs lined the streets picking up passengers. Luckily for this dumb tourist, there were markings at each cross walk reminding me which way to look for traffic. More than once I was almost barreled over because I forgot that Americans drive on the “wrong side of the road.”

I got back to my hotel, kicked off my shoes and realized how ridiculous tired I was. It was only 7:00pm but I was absolutely exhausted. I decided to call it a night. Jammies on, lights out, and settled in for the night.